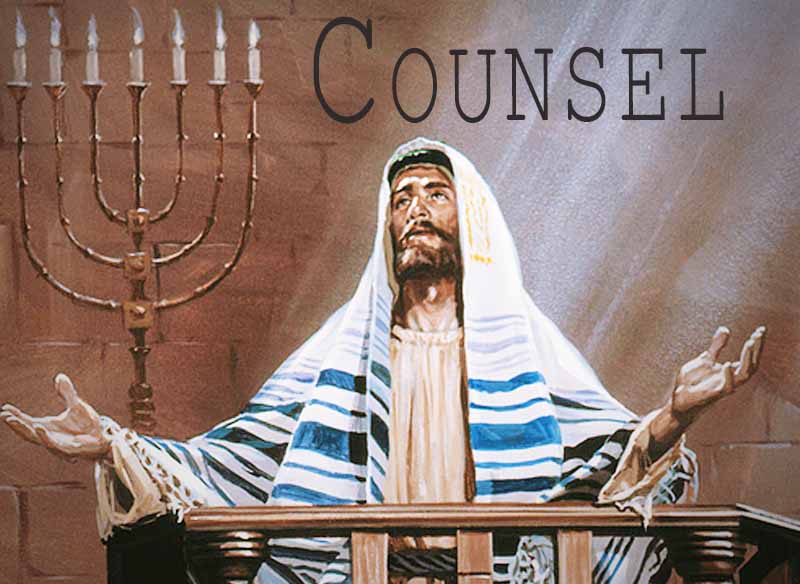 Today we will look at a couple of examples of people that were teaching and living accurately what they understood up to this point of their spiritual walk.  However, when counseled that there is MORE, they immediately received the counsel and took the steps of action given.

An example of Apollos taking counsel from Aquila and Priscilla in Acts 18:24-28.  It says, “24 Now a Jew named Apollos, an Alexandrian by birth, an eloquent man, came to Ephesus; and he was mighty in the Scriptures. 25 This man had been instructed [counseled] in the way of the Master [Yeshua]; and being fervent in spirit, he was speaking and teaching accurately the things concerning Yeshua, being acquainted only with the baptism of John [Baptism of Repentance pointing to Yeshua…equating to the purpose of Passover.]; 26 and he began to speak out boldly in the synagogue. But when Priscilla and Aquila heard him, they took him aside and explained to him the way of Elohim more accurately. [They gave him counsel about a more accurate truth than he currently understood.] 27 And when he [Apollos] wanted to go across to Achaia, the brethren encouraged him and wrote to the disciples to welcome him [Apollos]; and when he had arrived, he greatly helped those who had believed through grace, 28 for he powerfully refuted the Jews in public, demonstrating by the Scriptures that Yeshua was the Messiah.” [Remember, the only Scriptures that they had at this time is what is called today, “The Old Testament”.  That’s important to understand because it shows us that redemption of YHVH’s people through Yeshua was the goal of all that was given in the “Old Testament” Scriptures.]

As we keep reading in the book of Acts we see Paul now giving further counsel to some disciples of Yeshua.  In 19:1-7 it says;   “1 It happened that while Apollos was at Corinth, Paul passed through the upper country and came to Ephesus, and found some disciples. 2 He said to them, “Did you receive the Holy Spirit when you believed?” And they said to him, “No, we have not even heard whether there is a Holy Spirit.” 3 And he said, “Into what then were you baptized?” And they said, “Into John’s baptism.” 4 Paul said, “John baptized with the baptism of repentance, telling the people to believe in Him who was coming after him, that is, in Yeshua.” 5 When they heard this, they were baptized in the name of the Master Yeshua. 6 And when Paul had laid his hands upon them, the Holy Spirit came on them, and they began speaking with tongues and prophesying. [They immediately followed the Biblical counsel Paul gave them concerning water baptism in Yeshua’s name and the baptism of the Holy Spirit.]  7 There were in all about twelve men.”

May our hearts be eager to receive and walk in a “more accurate way” than we currently have when we are brought, Biblical counsel!!!