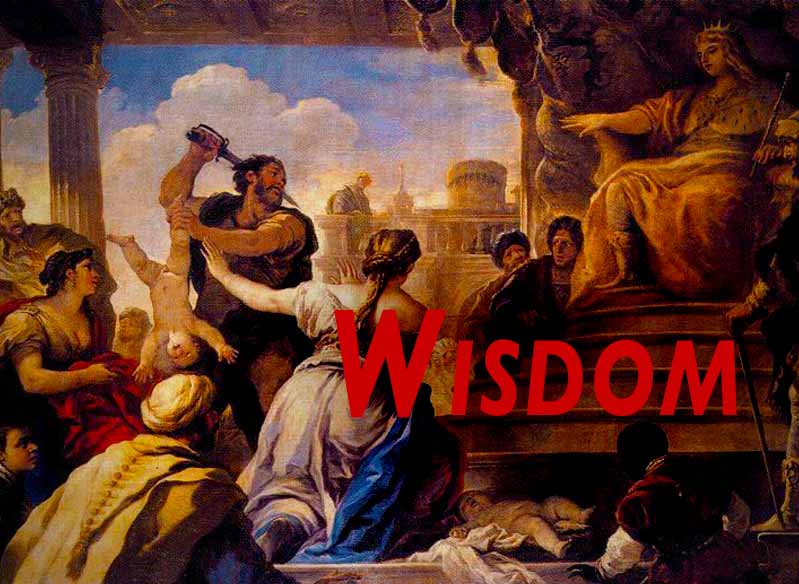 To be graced with the Spirit of Wisdom is more vital than we may realize at times.  It can truly be the difference between life and death by whether we choose to inquire of our heavenly Father and walk in it or lean to our own wisdom.  As we’ve mentioned before, James 1:5 says, “But if any of you lacks wisdom, let him ask of Elohim , who gives to all generously and without reproach, and it will be given to him.”  That’s a promise that we can have complete faith in and receive!!  The key is to stop and take the time to inquire of YHVH concerning it.  Below we will read in the Kings account where Solomon inquired of YHVH for understanding and the ability to discern between good and evil.  But this cannot come without  wisdom, which we will see in the coming verses.

7 Now, O YHVH my Elohim, You have made Your servant king in place of my father David, yet I am but a little child; I do not know how to go out or come in. [Notice the humility of Solomon.]

8  Your servant is in the midst of Your people which You have chosen, a great people who are too many to be numbered or counted.

9 So give Your servant an understanding heart to judge Your people to discern between good and evil. For who is able to judge this great people of Yours?”

YHVH granted Solomon’s request and afterward he went to Jerusalem to give offerings and hold a feast for his servants.  Following that he had an opportunity to walk in the wisdom granted to him. Wisdom that was the difference between life and death.

16 Then two women who were harlots came to the king and stood before him.

17 The one woman said, “Oh, my lord, this woman and I live in the same house; and I gave birth to a child while she was in the house.

18 It happened on the third day after I gave birth, that this woman also gave birth to a child, and we were together. There was no stranger with us in the house, only the two of us in the house. [No one to be a witness to what the truth is]

19 This woman’s son died in the night, because she lay on it.

20 So she arose in the middle of the night and took my son from beside me while your maidservant slept, and laid him in her bosom, and laid her dead son in my bosom.

24 The king said, “Get me a sword.” So they brought a sword before the king.

26 Then the woman whose child was the living one spoke to the king, for  she was deeply stirred over her son and said, “Oh, my lord, give her the living child, and by no means kill him.” But the other said, “He shall be neither mine nor yours; divide him!”

27 Then the king said, “Give the first woman the living child, and by no means kill him. She is his mother.”

28 When all Israel heard of the judgment which the king had handed down, they feared the king, for they saw that the wisdom of Elohim was in him to administer justice.

If we have not done so before, may we bow in our hearts before our heavenly Father and ask Him to give us the Spirit of Wisdom.  To daily and consistently inquire of our Creator for His wisdom could make all the difference in the outcome of our situations.