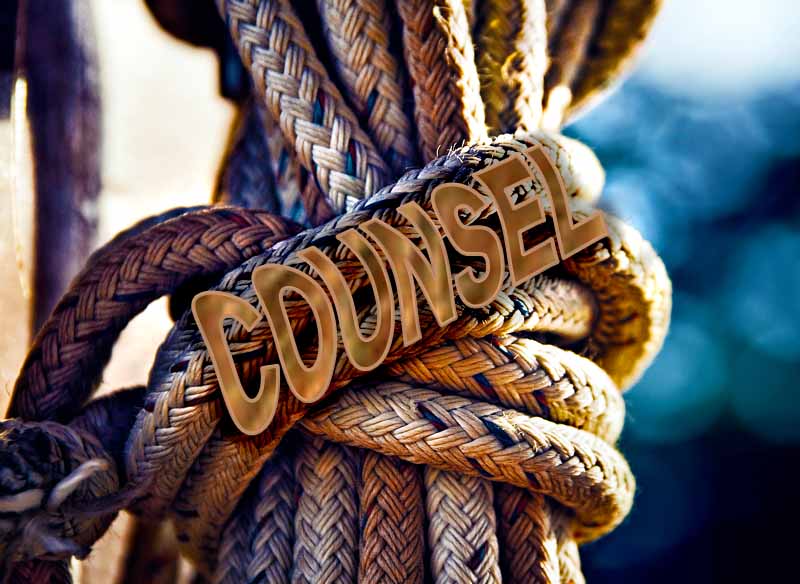 Photo by Robert Zunikoff on Unsplash

The Spirit of Counsel, when it is based on the Word and given from Elohim, will spare us MUCH chaos and calamity.  When the counsel is twisted or avoided, the opposite is true. It is a beautiful gift to help us with our walk in this kingdom. Is it always easy? No. All things considered, is it beneficial? Yes.  Today we will look at a pattern in Scripture where counsel was given, partially taken, then twisted, which ultimately ended in being considered as one who didn’t take the counsel.  When we wrangle wise counsel to compromise our circumstances, we do so to our own hurt.

Let’s dive into 2 Chronicles 25. “ ​1  Amaziah was twenty-five years old when he became king, and he reigned twenty-nine years in Jerusalem [Until he was 54 years old]. And his mother’s name was Jehoaddan of Jerusalem. 2  He did right in the sight of YHVH, yet not with a whole heart. [We can trace the commandment to serve YHVH with ALL of our heart, soul, mind and strength back to the Shema in the Torah.  Deuteronomy 6:4-9 & Deuteronomy 11] 3  Now it came about as soon as the kingdom was firmly in his grasp, that he killed his servants who had slain his father the king. 4  However, he did not put their children to death, but did as it is written in the law in the book of Moses, which YHVH commanded, saying, “Fathers shall not be put to death for sons, nor sons be put to death for fathers, but each shall be put to death for his own sin.”

5 Moreover, Amaziah assembled Judah and appointed them according to their fathers’ households under commanders of thousands and commanders of hundreds throughout Judah and Benjamin; and he took a census of those from twenty years old and upward and found them to be 300,000 choice men, able to go to war and handle spear and shield. 6  He hired also 100,000 valiant warriors out of Israel for one hundred talents of silver. 7  But a man of Elohim came to him saying [Came to give him counsel], “O king, do not let the army of Israel go with you, for YHVH is not with Israel nor with any of the sons of Ephraim. 8  But if you do go, do it, be strong for the battle; yet Elohim will bring you down before the enemy, for Elohim has power to help and to bring down.” 9  Amaziah said to the man of Elohim, “But what shall we do for the hundred talents which I have given to the troops of Israel?” And the man of Elohim answered [Gave him counsel], “YHVH has much more to give you than this.” [A pattern for us that when we’re asked by YHVH to give up something, what we receive in turn is so MUCH better or more than that which we give up.] 10  Then Amaziah dismissed them, the troops which came to him from Ephraim, to go home [Here he obeyed the counsel]; so their anger burned against Judah and they returned home in fierce anger.

11 Now Amaziah strengthened himself and led his people forth, and went to the Valley of Salt and struck down 10,000 of the sons of Seir. 12  The sons of Judah also captured 10,000 alive and brought them to the top of the cliff and threw them down from the top of the cliff, so that they were all dashed to pieces. 13  But the troops whom Amaziah sent back from going with him to battle, raided the cities of Judah, from Samaria to Beth-horon, and struck down 3,000 of them and plundered much spoil.

14 Now after Amaziah came from slaughtering the Edomites, he brought the gods of the sons of Seir, set them up as his gods, bowed down before them and burned incense to them. [One step forward, two steps backward. We must be on guard after a victory in obedience that we are not blinded and fall into a different snare and end up in an equally bad or worse situation.]  1.  Then the anger of YHVH burned against Amaziah, and He sent him a prophet who said to him, “Why have you sought the gods of the people who have not delivered their own people from your hand?” [Reminding Amaziah that their “gods” did nothing to save them, therefore they are not gods at all so why would you bow down to them and burn incense to them.  How does this apply to us? Why do we “bow down” to situations that are displeasing to YHVH and His Word when those situations actually lead us into blindness and disobedience, rather than a clear conscience before our Elohim.] 16  As he was talking with him, the king said to him, “Have we appointed you a royal counselor? Stop! Why should you be struck down?” [Arrogance and rejection of the truth when it went against what Amaziah thought led him to say this to the man of Elohim.] Then the prophet stopped and said, “I know that Elohim has planned to destroy you, because you have done this and have not listened to my counsel.”

Amaziah Defeated by Joash of Israel

17  Then Amaziah king of Judah took counsel and sent to Joash the son of Jehoahaz the son of Jehu, the king of Israel, saying, “Come, let us face each other.” [The original story in 2 Kings 14:8-20 clarifies that the word counsel in this verse is not advise, direction, instruction etc…it’s advocates or messengers.  Here is verse 8 from 2 Kings 14, “Then Amaziah sent messengers to Jehoash, the son of Jehoahaz son of Jehu, king of Israel, saying, “Come, let us face each other.””] 18  Joash the king of Israel sent to Amaziah king of Judah, saying, “The thorn bush which was in Lebanon sent to the cedar which was in Lebanon, saying, ‘Give your daughter to my son in marriage.’ But there passed by a wild beast that was in Lebanon and trampled the thorn bush. 19  You said, ‘Behold, you have defeated Edom.’ And your heart has become proud in boasting. Now stay at home; for why should you provoke trouble so that you, even you, would fall and Judah with you?” 20 But Amaziah would not listen [Would not take counsel because of his pride and stubbornness, therefore you will see how YHVH will eventually allow us to have our way and everything that comes with it], for it was from Elohim, that He might deliver them into the hand of Joash because they had sought the gods of Edom. 21  So Joash king of Israel went up, and he and Amaziah king of Judah faced each other at Beth-shemesh, which belonged to Judah. 22  Judah was defeated by Israel, and they fled each to his tent. 23  Then Joash king of Israel captured Amaziah king of Judah, the son of Joash the son of Jehoahaz, at Beth-shemesh, and brought him to Jerusalem and tore down the wall of Jerusalem from the Gate of Ephraim to the Corner Gate, 400 cubits. 24  He took all the gold and silver and all the utensils which were found in the house of Elohim with Obed-edom, and the treasures of the king’s house, the hostages also, and returned to Samaria. [A HIGH price for disobedience.] 25  And Amaziah, the son of Joash king of Judah, lived fifteen years after the death of Joash, son of Jehoahaz, king of Israel. 26  Now the rest of the acts of Amaziah, from first to last, behold, are they not written in the Book of the Kings of Judah and Israel? 27  From the time that Amaziah turned away from following YHVH they conspired against him in Jerusalem, and he fled to Lachish; but they sent after him to Lachish and killed him there. 28  Then they brought him on horses and buried him with his fathers in the city of Judah.”

While this is a very sobering historical account of our forefathers, it can serve to show us the high price of “seeking after other gods” and “mixing our worship”.  In today’s society, we may gloss over this because we don’t technically bow down to a literal image, but when we seek our own thoughts, humanism or worldly concepts to take our counsel, rather than the counsel of His patterns from the Word, we are, in reality doing the same thing. May we submit to the Spirit of Counsel and be filled with the ability to wisely discern and fully obey what is right and good!!  YHVH has much more to give us than we can give to ourselves!! J