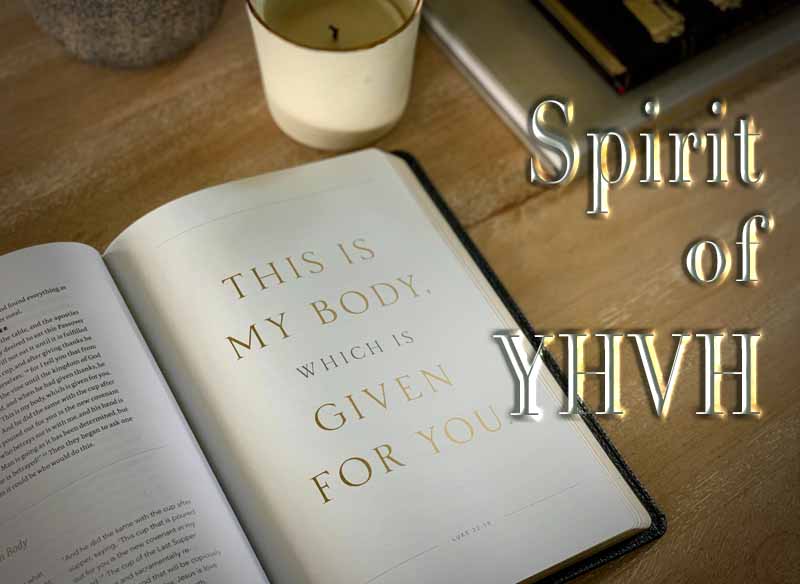 Photo by Tim Wildsmith on Unsplash

The Spirit of YHVH is the central component of drawing us to salvation.  Without the Spirit convicting and wooing us we would have no desire to repent and come into salvation.  When we yield to the life giving Spirit of our Creator we receive LIFE into our mortal bodies and most importantly ETERNAL LIFE.  Today we will read the words of Yeshua speaking to this, but may we also grow in our understanding of metaphors and idioms that are used in the natural to show forth spiritual realities.

down and we are to spiritually partake of Him. First the natural then the spiritual. 1 Corinthians 15:46 ]

42 They were saying, “Is not this Yeshua, the son of Joseph, whose father and mother we know? How does He now say, ‘I have come down out of heaven’?”

43 Yeshua answered and said to them, “Do not grumble among yourselves.

44 No one can come to Me unless the Father who sent Me draws him; and I will raise him up on the last day.

45 It is written in the prophets, ‘And they shall all be taught of Elohim.’ Everyone who has heard and learned from the Father, comes to Me.

47 Truly, truly, I say to you, he who believes has eternal life.

49 Your fathers ate the manna in the wilderness, and they died.

50 This is the bread which comes down out of heaven, so that one may eat of it and not die. [Spiritually one will not die that partakes in Yeshua for salvation.]

51 I am the living bread that came down out of heaven; if anyone eats of this bread, he will live forever; and the bread also which I will give for the life of the world is My flesh.”

52 Then the Jews began to argue with one another, saying, “How can this man give us His flesh to eat?” [They missed the point!! Yeshua kept trying to get them to understand the function and the message about the bread and life, but they kept clinging to the form and the

method…the natural realm rather than understanding that what is in the natural actually represents that which is MORE real in the spiritual.  This often happens when interpreting Scripture, the message being conveyed is missed because we get hung up on the method

used to communicate the message, i.e., Yeshua is the bread that came down out of heaven.  They cannot see how He is bread that is to be literally eaten. This is where we desperately need the Spirit of YHVH to open the eyes of our understanding so that we do not fall into

the same category as the men arguing with Yeshua in this chapter.  This doesn’t discount that they will be commanded to do something in the natural to represent this truth, such as eat unleavened bread and drink the wine to show forth the body and blood of Yeshua, the Lamb

of Elohim, but we must not miss who and what it represents.

53 So Yeshua said to them, “Truly, truly, I say to you, unless you eat the flesh of the Son of Man and drink His blood, you have no life in yourselves. [Everything that applying the blood and eating the Passover lamb represented to redeem them out of the bondage of Egypt is

realized through the shed blood of Yeshua when we receive Him as Messiah. From henceforth we will do the Passover in remembrance of Him and the exodus from Egypt which shows us a natural manifestation of a spiritual truth that we are now free from the bondage of sin.]

54 He who eats My flesh and drinks My blood has eternal life, and I will raise him up on the last day. [Receives Him as the Passover Lamb that takes away the sins of the world.]

56 He who eats My flesh and drinks My blood abides in Me, and I in him.

58 This is the bread which came down out of heaven; not as the fathers ate and died; he who eats this bread will live forever.”

59 These things He said in the synagogue as He taught in Capernaum.

60 Therefore many of His disciples, when they heard this said, “This is a difficult statement; who can listen to it?”

61 But Yeshua, conscious that His disciples grumbled at this, said to them, “Does this cause you to stumble?

62 What then if you see the Son of Man ascending to where He was before?

63 It is the Spirit who gives life; the flesh profits nothing; the words that I have spoken to you are spirit and are life.

64 But there are some of you who do not believe.” For Yeshua knew from the beginning who they were who did not believe, and who it was that would betray Him.

65 And He was saying, “For this reason I have said to you, that no one can come to Me unless it has been granted him from the Father.” [The Father is Spirit and they who worship Him must worship Him in Spirit and in truth. John 4:24]

Multiple times in these verses Yeshua said, “I am the bread which came down out of heaven.”  But He wasn’t talking about literal bread, but spiritual bread.  This is one of many patterns given to us in Scripture that shows how important it is for us to learn that we NEED the Spirit of YHVH to impart understanding in order to know how to apply it to our lives and walk it out.  May our hearts be open to receive so that we don’t find ourselves quarrelling with the truth of His Word and discounting its application for us today.